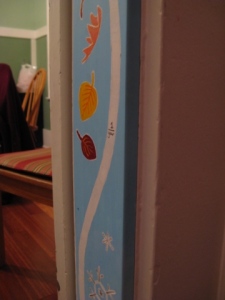 This weekend I shared something with my one year-old niece: our first Canadian Thanksgiving. She was born just after Thanksgiving last year.

The most glaring difference I’ve noticed between Thanksgiving in the U.S. and in Canada is that Canadian Thanksgiving is on a Monday. Other than that, it’s pretty much the same.

In the process of celebrating Canadian Thanksgiving, I have learned a few other things about our Canuck brethren and sisteren.

1. Conservatives are blue and liberals are red, which when you think about it, makes more sense.

2. Election season in Canada is only SIX WEEKS LONG! Two years less than what we’ve had to endure south of the border.

3. It’s traditional for the Finance Minister to wear brand-new shoes when presenting the new budget.

4. Saskatchewan, despite its reputation as a barren wasteland, is the sunniest province in Canada. (Which is like being the rainiest place in the Sahara.)

5. Ottawa is the second or third coldest capital in the world, tied with Moscow, and right behind Ulan Batar, Mongolia.

We celebrated like true Canucks, enjoying breakfast at the Dutch Wooden Shoe Pannekoek House. In the afternoon we followed the age old wisdom of Canadian superstar Robin Sparkles…