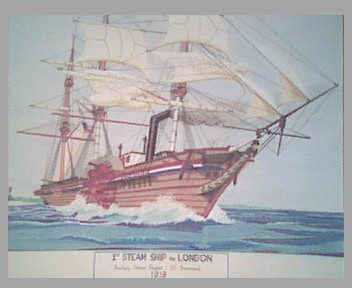 They say there’s nary a time like maritime — or is that no time like show time? At any rate, if there was ever a time to celebrate the merchant marine, that would be today, May 22, National Maritime Day.

Today the United States commemorates all those who have served in the merchant marine. Congress declared May 22 National Maritime Day in 1933. They chose May 22 because it was the anniversary of the day back in 1819 when the steamship SS Savannah left Savannah harbor in Georgia on its way to becoming the first steam-powered vessel to cross the Atlantic Ocean.

The SS Savannah arrived in Liverpool, England, twenty-nine days and four hours later. Even though it spent most of the journey sailing rather than steaming, the success of the Savannah was an important milestone for a young nation bordered by two oceans, and the voyage  made more established nations  such as England, Sweden, Russia, and France take note. King Charles XVI even offered to buy the Savannah for $100,000 of hemp and iron.

The merchant marine would be a vital component of U.S. Defense over the next 190 years. In fact, during World War II, the merchant marine suffered a higher casualty than any branch of the armed forces except for the Marines. However, it wasn’t until the 1980s that merchant marine veterans were accorded many of the rights and privileges of other veterans.

National Maritime Day is also a good time to educate youngsters about those eternal questions of life at sea. Questions like “Why is it called a ‘poop deck’?” No, you don’t need to avoid the poop deck on humid days. Poop is from the French ‘la poupe’, meaning stern (stern like in rear, not like your 4th grade teacher). The poop deck is so named because it’s located in the aft of the ship.

As for the Savannah, its post-Atlantic life was less than glamorous. The steam-powered engined was removed to make more space for cargo. Two years later, the ship that sailed the Atlantic was wrecked off the coast of Long Island. It would take another 30 years for a second U.S. steamship to successfully cross the Atlantic.