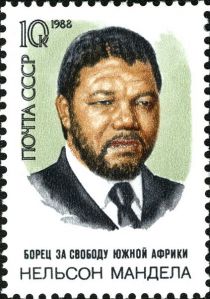 July 18 (not an official holiday in South Africa)

“We must accept the fact that in our country we cannot win one single victory of political freedom without overcoming a desperate resistance on the part of the Government, and that victory will not come of itself but only as a result of a bitter struggle by the oppressed people for the overthrow of racial discrimination…

The theory that we can sit with folded arms and wait for a future parliament to legislate for the ‘essential dignity of every human being irrespective of race, colour, or creed’ is crass perversion of elementary principles of political struggle.”

Mandela’s story is legendary, not only for the 27 years he spent in prison, but for the reasons he arrived there and for his singular journey since.

Mandela was arrested on Sunday, August 5, 1962 for speaking against the government in public and leaving the country illegally, for which he was sentenced for five years.

“While serving this sentence, he was tried again for more serious charged connected with his leadership of the armed resistance group, Umkhonto we Sizwe. He and his colleagues were convicted of terrorism, narrowly escaping execution, receiving life sentences instead.”

Terrorism? Yes, in a post-9-11 world, heads of state downplay that for nearly three decades Nobel Peace Prize Laureate Nelson Mandela had been deemed a terrorist by the apartheid “justice” system.

During his imprisonment the island on which Mandela was held—Robben Island—became known as “Mandela University.” The political prisoner educated other inmates who then continued the struggle against racism outside the prison walls.

— A Pilgrimage to the Isle of Makana, from Call Me Not a Man, by Mtutuzeli Matshoba

The famous cry “Free Nelson Mandela” really meant “Free South Africa”. On February 11, 1990, the first half of that long sought prize came to pass. Since 1966, not so much as a photograph had been taken of Mandela. His release was broadcast around the world.

Freedom, however, is not a moment but a journey. As late as 2008, due to red tape and lack of oversight, Mandela and other members of the African National Congress were still on the U.S. terrorist watch list.

“In the 1970s and ’80s, the ANC was officially designated a terrorist group by [South Africa’s] ruling white minority. Other countries, including the United States, followed suit.” — USA Today 4/30/08

“It is frankly a rather embarrassing matter that I still have to waive in…the great leader, Nelson Mandela.” — Secretary of State, Condoleezza Rice

Mandela and the ANC were removed from the list by a special bill signed by President Bush in July 2008, just prior to Mandela’s 90th birthday.

Meanwhile, in the country of Ghana…

President John Evans Atta Mills on Friday called on Ghanaians to observe Saturday, July 18, 2009 as Nelson Mandela International Day to commemorate his leading role in Africa’s liberation struggle… “The day is Mr. Nelson Mandela’s birthday and those observing this day are required to contribute 67 minutes of their time to the service of their communities in recognition of the 67 years Nelson Mandela has spent in serving humanity.”