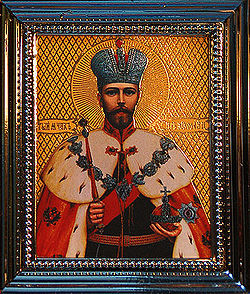 It’s not an official holiday yet, but with the Russian Orthodox Church’s beatification of the last Russian Tsar and his family in 2000, the Romanovs do have their own saint day—July 17—the anniversary of the day they were executed in 1918.

Nicholas II, the last Russian Tsar, is a touchy subject in the former Soviet Union. He and his family met a horrifying end at the hands of revolutionaries who banned all religion in Russia except worship of the state. But Russians also recall that Nicholas’s decisions wrought unrecoverable damage to one of the strongest empires on earth.

Nicholas’ reign was troubled from the get-go. Four days after his coronation in 1896, a panic during his banquet festivities in Moscow resulted in the trampling-to-death of nearly 1,400 celebrants. Though not the Tsar’s fault, Nicholas’ decision to attend a ball at the French Embassy that night anyway did not win kudos from the Russian people.

The following decade saw the tragic massacre known as Bloody Sunday, where striking workers and their families hoping to bring a petition to Nicholas II in St. Petersburg were instead gunned down by police. Public reaction to Bloody Sunday led the Tsar to allocate power to the political body known as the Duma.

But the end of his reign must be attributed to his refusal to pull out of World War I, even when his country was on the verge of total political and economic collapse. Mass mutinies led Nicholas to suspend the Duma, but members of the Duma and the Soviet, as well as leading generals, demanded Nicholas’s abdication. By 1917, the Tsar’s most loyal troops were lying under the sod of western battlefields; he abdicated in March.

Russia’s short-lived democratic government shielded the Romanovs in St. Petersburg, but during the October Revolution, that government was ousted by the Bolsheviks. The Bolsheviks wanted to leave no chance that Russia would return to the old aristocratic system. On July 17, 1918, the Bolsheviks gunned down Nicholas and the entire royal family in a cellar in St. Petersberg, including his wife Alexandra, their four daughters, and their 14 year-old son Alexei.

On July 17, 1998, eighty years to the day after their deaths, the royal family was interred in St. Peter and Paul Cathedral in St. Petersburg. They’re considered saints after the 2000 beatification, but not martyrs. To be a martyr of the Church, one’s death must be a direct result of one’s Christian faith. The Romanovs are honored instead as “Passion bearers”—those who met death in a Christ-like way.

Defenders of the Motherland Day