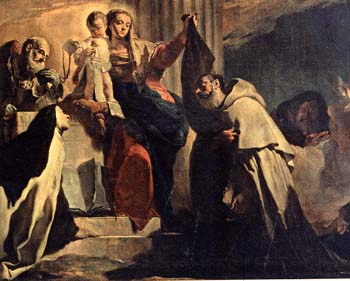 What are Carmelites? Was Clint Eastwood their mayor? Are they responsible for my favorite Frappuccino toppings?

No, the Carmelites are named for Mount Carmel in Israel, a peak considered sacred to Jews, Muslims, Christians, and Bahais.

Mt. Carmel is mentioned prominently in the Old Testament, including the Book of Kings, wherein Elijah challenges the prophets of Baal and Asherah to light a fire atop the mountain.

Nearly two-thousand years later, according to hagiographers, a French Crusader by the name of Berthold founded a monastic order on Mount Carmel—on the site of Elijah’s Cave—after receiving a vision from Christ. St. Berthold remained in charge of the monastery until his death in 1195.

The most famed leader of the Order of the Brothers of Our Lady of Mount Carmel, or the Carmelites, may have been an English hermit named Simon Stock. During Stock’s tenure as prior, the Carmelite Order was in danger of being suppressed.

Oppressed by the Saracens, the monks slowly emigrated to Europe. During the night preceding the sixteenth of July, 1225, the Blessed Virgin is said to have commanded Pope Honorius III to approve the foundation.

The legend goes that on July 16th, 1251, St. Simon Stock had a vision of the Virgin Mary who presented him with a sacred scapular and a promise of protection for those who wore it.

“Take, beloved son, this scapular of thine order as a badge of my confraternity and for thee and all Carmelites a special sign of grace; whoever dies in this garment, will not suffer everlasting fire. It is the sign of salvation, a safeguard in dangers, a pledge of peace and of the covenant.”

The Order was not suppressed, and in fact grew in prominence over the next several hundred years, even splitting off into different branches.

Today the special scapular is a defining vestige of the Carmelites, and they celebrate the anniversary of the apparition of the Virigin Mary—Our Lady of Mount Carmel—on July 16th every year.

In observation of the 750th anniversary, to be celebrated on July 16, Pope John Paul II has written a special letter to the Carmelites, saying: “I also carry the scapular on my heart… for the love that it nutures toward the common Heavenly mother, whose protection is continually springing forth.”

VIA Inside the Vatican Newsflash: John Paul II and the Brown Scapular , by John Drogin

Mary and Carmelite Spirituality, another viewpoint

2 Replies to “Our Lady of Mount Carmel”