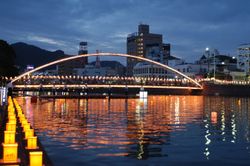 “In the time of Shaka; one of his fellows Mokuren saw the image of his dead mother suffering in hell. Mokuren was desperate to relieve her pain and asked Shaka for help. Shaka answered, “On 15th of July, provide a big feast for the past seven generations of dead.”‘— Japan 101

OK, Buddha may not have actually said “15th of July”, since he lived 300 years before Julius Caesar. But he did say “15th day of the seventh month.” Whether that’s according to the lunar or solar calendar depends on who you ask.

In the lunar calendar the Festival of Obon—the Japanese festival of the dead—tends to fall in August. But in Tokyo and the east of Japan, many temples observe Obon according to the solar calendar—on July 13th through the 15th. The result is that anywhere you look between mid-July and August there’s bound to be Obon festivities happening somewhere.

Obon is one of the most important holidays in the Japanese calendar, second only to New Year’s Day in most communities. Japanese usually return home to be with their families during the Obon season to carry on a tradition that has been celebrated for over 500 years in Japan.

Families enjoy time together, partake in Obon rituals and tidy up the graves of their ancestors.

One tradition is to release floating paper lanterns on the water on the last night of Obon, in order to guide the departed spirits to the after world.

Another is the age-old Bon Odori, or Bon Dance, which emulates the dance of joy and gratitude that Mokuren did when his mother was released from hell.

Obon is a shortened form of the word urabon’e, which means “hanging upside-down and suffering.” The purpose of Obon is relieve the suffering of the Urabon’e.

One Reply to “Obon – Japan”