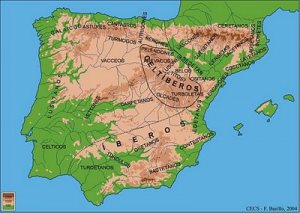 Tonight as you count down to midnight, if you’re wondering why we picked such a completely random date to celebrate as the New Year—neither solstice nor equinox nor anniversary—take a moment to thank the folks of Segeda, Spain, a town that stood near present-day Zaragoza.

Up until the 2nd century B.C., the Roman civic calendar began in mid-March, around the spring equinox and the beginning of the planting season; officials convened in Rome on the full moon (Ides) of that month.

The number of the year was determined by which consuls were in office that term. e.g., the “8th year of the term of Glutimus Maximus”. [We use a similar system today in the West, though we don’t generally say it’s the “2009th year of Our Lord Jesus Christ” (2009 Anno Domini Nostri Jesu Christi). We just say 2009 A.D.]

Around 154 BC. the Romans were extending their empire westward into Spain, which was then inhabited by the Celtiberians. That year the Celtiberians of Segeda, having no respect for the Roman civic calendar, inconveniently rebelled while the government was not in session.

Rather than waiting until March to respond, the Romans called an “emergency session of Congress”, so to speak, in January, in order to appoint Quintus Filvius Nobilior as consul to deal with the western territories. His mission: go to Spain and kick some Celtiberian butt.

Filvius wasn’t very successful. In fact, it would be a hundred years before the peninsula was fully subdued.

But the January tradition stuck.

Most folks continued to celebrate the New Year in March as they always had. (Persians still do celebrate Norouz on the spring equinox.) But over the centuries the Julian calendar–implemented by Julius Caesar–replaced the older agrarian traditions.

15 centuries later Pope Gregory XIII overhauled the calendar to correct the 11 extra leap days that had misaligned the Julian calendar from the solstice. Northern Europe was the last to adopt the new “Gregorian” system. Britain, and by extension, the American colonies, only did so in 1752. Before that, most of us still considered March to be the start of the New Year.  March 25 to be exact–believed to be the anniversary of the conception of Christ back in 1 A.D.

So had the folks of Segeda just been a little more patient and waited a couple of months to rebel, we might still be celebrating New Year’s in March.

But as it is, we toast a cup ‘o’ kindness on December 31, to days of Auld Lang Syne, and to the Celtiberians who made this night possible.

Why the Fuss of January 1?

The Celtiberian War and Numantia

One Reply to “New Year’s Eve”