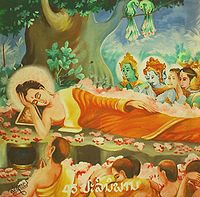 All beings by nature are Buddhas,
As ice by nature is water.
Apart from water there is no ice,
Apart from beings, no Buddhas.

Even though today marks the death of one of the most revered figures in world history, Nirvana Day (or Parinirvana Day) is a celebration. Buddha’s death in the 5th or 6th century BCE is seen as the release of Buddha from his earthly body into a state of pure Nirvana.

Gautama Buddha first achieved enlightenment, or Bodhi, at age 35, while sitting beneath what is now the “Bodhi Tree” in Bodh Gaya, Bihar, in India. Buddha means “One who has achieved Bodhi,” or “the Awakened One.”

He spent the next 45 years traveling the countryside teaching the Dharma and practices of what came to be known as Buddhism, a revolutionary religion which had no caste system, nor discrimination based on race or class.

Buddha was 80 years old when he ate his last meal, in the mango grove of Cunda the Blacksmith. Months before his death Buddha had forewarned his disciples:

“My years are now full ripe, the life span left is short…”

After the meal that Cunda had prepared, the Buddha became ill.

“…dreadful sickness came upon the Lord. But nature’s pangs he endured. ‘Come, let us go to Kusinara,’ was his dauntless word.”

Buddha and his disciple Ananda carried on, until the weary Teacher asked to rest by the side of the road. They took shelter beneath a tree.

At the Kakuttha River, Buddha bathed and drank, lay down on his right side and told his chief lieutenant Ananda:

“It may come to pass, Ananda, that someone will cause remorse to Cunda the metalworker, saying: ‘It is no gain to you, friend Cunda, but a loss, that it was from you the Tathagata [Buddha’s name for himself] took his last alms meal, and then came to his end.’

Then, Ananda, the remorse of Cunda should be dispelled after this manner:

‘It is a gain to you, friend Cunda, a blessing that the Tathagata took his last alms meal from you, and then came to his end. For, friend, face to face with the Blessed One I have heard and learned: “There are two offerings of food which are of equal fruition, of equal outcome, exceeding in grandeur the fruition and result of any other offerings of food. Which two?

The last days and teachings of Buddha are described in the Maha Paranibbana Sutta, parts of which are recited on Nirvana Day:

“And what, bhikkhus, are these teachings? They are the four foundations of mindfulness, the four right efforts, the four constituents of psychic power, the five faculties, the five powers, the seven factors of enlightenment, and the Noble Eightfold Path.

“These, bhikkhus, are the teachings of which I have direct knowledge, which I have made known to you, and which you should thoroughly learn, cultivate, develop, and frequently practice, that the life of purity may be established and may long endure, for the welfare and happiness of the multitude, out of compassion for the world, for the benefit, well being, and happiness of gods and men.”