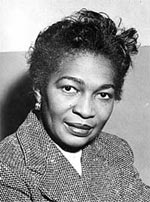 The word “carnival” comes from the Latin carne vale meaning “farewell to the flesh”. It originally referred to festivals that fell just before Lent, when eating meat was forbidden. Famous pre-lenten carnivals include Rio de Janeiro, New Orleans, Nice, and Trinidad.

Inspired by the world-famous Trinidad Carnival, Notting Hill takes place in August, because you’d have to be nuts to wear a thong in England in February.

The ‘Mother of Notting Hill Carnival’ is Claudia Jones, a native of Trinidad who spent almost her entire life on three vastly different islands: Trinidad, Manhattan, and England.

Born in Trinidad in 1915, Jones immigrated to Harlem, New York with her family at age 7. As a teen, she took part in a protest against the trial and prosecution of the Scottsboro Nine, and she spent much of the next 20 years fighting the inequalities of the U.S. justice system. She became a vocal supporter of the Communist League and a prominent writer for the Daily Worker.

As a reward for her outspokenness, Jones was arrested in 1948 on immigration charges and nearly deported, despite having lived in the U.S. for 26 years. She was arrested a few years later, along with other Communist Party leaders, for supposedly violating of the Smith Act during the height of the McCarthy era frenzy. While in prison the 40 year-old Jones suffered a heart attack. This and a bout of tuberculosis she contracted in her youth would plague her health for her remaining years.

In October 1955 she was deported from the U.S., and was granted asylum in what would be her final island: England.

As temperatures rose in Notting Hill in August 1958, the city erupted in race riots, in which hundreds of whites attacked the neighborhood’s West Indian residents. In addition to speaking out against the riots, Jones decided to create an event that would promote racial harmony while celebrating the music and talent of England’s West Indian heritage. This forerunner of the Carnival was held indoors in its first years, starting in 1959.

Today the Notting Hill Carnival is London’s largest annual public event, and at over a million people, it’s one of the largest street festivals in the world.

Jones would probably be delighted to know that an estimated 1.5 million people of all faiths and races attended the 2000 Notting Hill Carnival—more than the entire population of her homeland of Trinidad.

Caludia Jones: A Life of Struggle