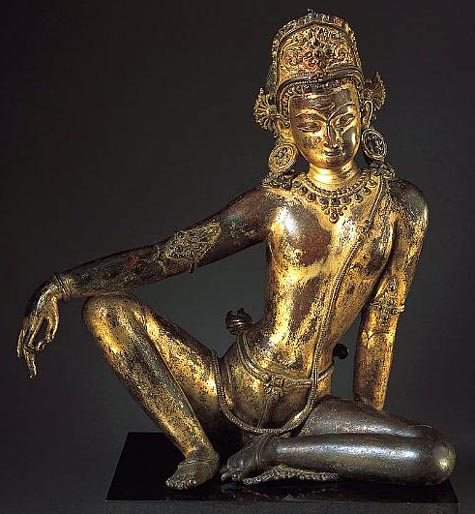 Day One of Pongal is called Bhogi or Bogi, and is dedicated to the storm god Indra. Indra is the leader of the Devas–the gods and celestial beings that watch over the heavens and control the elements–such as wind, fire, rain, and air. Indra’s weapon is the thunderbolt. In that way he is similar to the Norse Thor, though his status is higher. Indeed, Indra is the subject of roughly 250 hymns and stories in the Rigveda, more than any other deity. He is incredibly handsome, but he has more vices than any other god. (Maybe that’s why he makes for such good stories!) And he never turns down a good cup of soma (the “Red Bull and vodka” of the gods.) Which would explain why the weather is the way it is.

He is known for his strength and smarts in slaying the dragon Vritra, which represents chaos and non-existence. It is one of the most famous battles in Hindu mythology. In defeating Vritra, Indra separates and supports the heavens and earth.

He is not as revered in modern Hinduism as he once was. This is partly attributed to his character flaws–his mistakes catch up to him and his power reduced–and partly due to the rising influence of gods such as Shiva, Vishnu and Devi. (And maybe we just aren’t as at the whim of the weather as we were in Indra’s prime.)

Bhogi is a day for family. Houses are cleaned and scrubbed top to bottom and all extra clutter is set aside, (the original Spring cleaning) and surfaces are prepared for decoration with a specially-prepared rice and paste concoction, Kolam, adorned with red mud.

In the fields freshly-harvested rice is cut with sickles anointed with sandalwood and paste. A bonfire is lit and all aforementioned “clutter” from the house is burned, along with agricultural waste. The fire symbolizes staying warm during the “last lap of winter.”