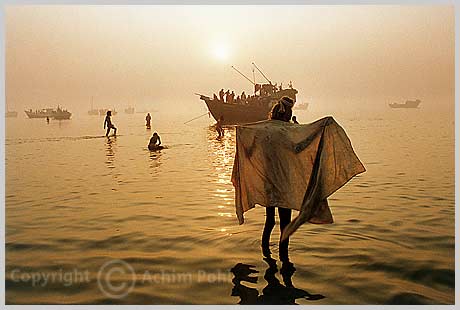 Today is the first day of Uttarayan, the 6-month season which lasts from January 14 to July 14 in India.

The festivals that celebrate the changing of the season go by many names in India. Makar Sankranti, Pongal, Lohri, and so on. They coincide with January 13th/14th in the Gregorian calendar.

The reason why Makar Sankranti is celebrated more than any other is that it marks the day the Sun starts moving north and the auspicious half of the year is characterized by increasing daylight. Of all the heavenly bodies, the Sun is the most glorious and the most important to life – and the Festival Marak Sankranti is one of the most important and happy feasts in its honor. It is the time when winter begins to loosen its grip and the days begin to grow warmer and warmer. — from Indian Festivals and Events

Sankranti means, literally, to change direction, or to go from one place to another, and Makara (a crocodile/snail/elephant hybrid) refers to the Indian predecessor of the Greek constellation Capricorn. Thus, January 14th in India marks the day the sun begins to move from Sagittarius to Capricorn in the north.

The winter harvest festivals are celebrated in different ways among the one-billion plus people who make up the cultures of India. In the south January 14th is only the first day of a four-day holiday known as Pongal, named for the special rice dish associated with the harvest festival.

Indians in Gujarat celebrate with feasts and kite festivals in which the colorful skies help waken the gods who hibernated through winter. The largest of these is the International Kite Festival in Ahmedabad.