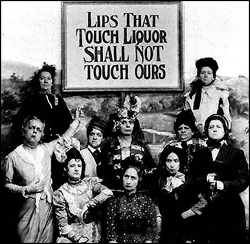 Blessed are you, Lord, our God, King of the universe, who creates the fruit of the vine.

January 17 is the birthday of three of the most iconic Americans ever: Benjamin Franklin, Muhammad Ali, and Al Capone.

On January 16, 1919, the day before Alphonse Capone’s 20th birthday, the United States bestowed upon the new father and husband the best birthday present he could ever wish for: the 18th Amendment.

Having been ratified by the required 36 states, the 18th amendment declared that a year from its passage, the sale, manufacture and transportation of alcohol would be illegal in the United States. Hence, on January 17, 1920, at 12:01 am the Prohibition Era began.

Thanks to Prohibition, Al Capone became the most infamous bootlegger and gangster in U.S. history, until he was convicted, not of racketeering, murder, or bootlegging, but of income tax evasion.

Moral of the story: If you’re gonna break every law in the book, don’t mess with the IRS.

The 18th Amendment was repealed in 1933. By that time Capone was enjoying a ten-year vacation overlooking the San Francisco Bay from Alcatraz prison, courtesy of the U.S. Department of Justice.

Many folks celebrate Prohibition Remembrance Day on January 16, the last day it was legal to drink in 1920. (Technically you could still consume alcohol after January 16, 1920. You just couldn’t make it, sell it, transport it, import it or export it.) Since January 16 is also Religious Freedom Day, I suggest combining the two and celebrating Get Drunk and Pray Day. As Benjamin Franklin is attributed as saying:

Beer is proof that God loves us and wants us to be happy.

Although countless sources attribute the above quote to Ben, he wasn’t a beer guy. He was a wino. What he actually wrote was:

“In vino veritas”, says the wise man, “Truth is in wine.”

Before the days of Noah, then, men, having nothing but water to drink, could not discover the truth.  Thus they went astray, became abominably wicked, and were justly exterminated by water, which they loved to drink.

The good man Noah, seeing that through this pernicious beverage all his contemporaries had perished, took it in aversion; and to quench his thirst God created the vine, and revealed to him the means of converting its fruit into wine.  By means of this liquor he discovered numberless important truths; so that ever since his time the word to “divine” has been in common use, signifying originally,  to discover by means of WINE. (VIN) Thus the patriarch Joseph took upon himself to “divine” by means of a cup or glass of wine, a liquor which obtained this name to show that it was not of human but “divine” invention… nay, since that time, all things of peculiar excellence, even the Deities themselves, have been called “Divine” or Di-“vin”-ities.

We hear of the conversion of water into wine at the marriage in Cana as of a miracle.  But this conversion is, through the goodness of God, made every day before our eyes.  Behold the rain which descends from heaven upon our vineyards; there it enters the roots of the vines, to be changed into wine; a constant proof that God loves us, and loves to see us happy.