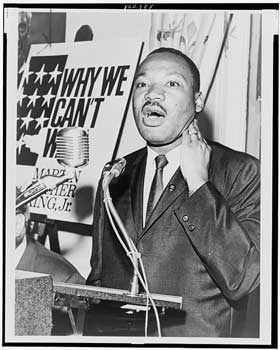 Martin Luther King Jr. was born on January 15, 1929. His birthday is observed in the United States on the third Monday in January.

Calling Dr. Martin Luther King Jr.’s address to the American people on August 28, 1963 the “I Cash a Check” speech may not have resonated as well as “I Have a Dream.” But that’s what it was.

One hundred years after the Emancipation Proclamation, a quarter million African-Americans and Civil Rights supporters gathered at the nation’s capital to demonstrate that the end of slavery had not translated to the promise of freedom, or the unalienable rights propounded in the nation’s founding document. As the 34 year-old Baptist minister explained:

“In a sense we have come to our nation’s capital to cash a check. When the architects of our republic wrote the magnificent words of the Constitution and the Declaration of Independence, they were signing a promissory note to which every American was to fall heir. This note was a promise that all men, yes, black men as well as white men, would be guaranteed the unalienable rights of life, liberty, and the pursuit of happiness.

“It is obvious today that America has defaulted on this promissory note insofar as her citizens of color are concerned. Instead of honoring this sacred obligation, America has given the Negro people a bad check, a check which has come back marked “insufficient funds.” But we refuse to believe that the bank of justice is bankrupt. We refuse to believe that there are insufficient funds in the great vaults of opportunity of this nation.”

Tomorrow, even though the actions, events, and policies of the last several years have conspired to nearly bankrupt our American economy, millions of Americans will gather in Washington again to see a segment of that check cashed, a small portion of that dream realized, as the nation swears in its first African-American President.

Barack Obama was a Senator, not even a presidential candidate, when he spoke at the groundbreaking ceremony for the Martin Luther King National Memorial in 2006. On a cold November morning he told the crowd:

“Unlike the others commemorated in this place, Dr. Martin Luther King Jr. was not a president of the United States – at no time in his life did he hold public office. He was not a hero of foreign wars. He never had much money, and while he lived he was reviled at least as much as he was celebrated.

“By his own accounts, he was a man frequently racked with doubt, a man not without flaws, a man who, like Moses before him, more than once questioned why he had been chosen for so arduous a task – the task of leading a people to freedom, the task of healing the festering wounds of a nation’s original sin.

“And yet lead a nation he did. Through words he gave voice to the voiceless. Through deeds he gave courage to the faint of heart. By dint of vision, and determination, and most of all faith in the redeeming power of love, he endured the humiliation of arrest, the loneliness of a prison cell, the constant threats to his life, until he finally inspired a nation to transform itself, and begin to live up to the meaning of its creed…

“In the Book of Micah, Chapter 6, verse 8, the prophet says that God has already told us what is good. “What doth the Lord require of thee, the verse tells us, but to do justly, and to love mercy, and to walk humbly with thy God?”

In his last speech over 40 years ago in Memphis, Tennessee, King alluded to the journey of Moses and the Hebrew slaves who escaped from bondage in Egypt, only to wander for 40 years in the desert.

After four decades, God called to Moses and told him to stand on the mountaintop, to look over the land God would bestow on the Israelites. Then the Lord said to him, “This is the land I promised on oath to Abraham, Isaac and Jacob when I said, ‘I will give it to your descendants.’ I have let you see it with your eyes, but you will not cross over into it.” [Deuteronomy 34:4]

King concluded his final speech with: