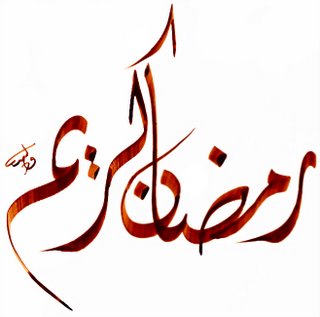 Like all Islamic months, Ramadan begins when the crescent moon is first visible, just after the new moon.

Families awaken early in the morning to eat Sahur (breakfast) before the sun rises and to pray the first of five daily prayers. The fourth prayer is at sunset (Maghrib), after which the family eats Iftar, the evening meal. Eating in between is forbidden, with exceptions for children, diabetics, pregnant women, the very elderly, ill people, etc. [No, you can’t eat children or ill people, silly. Children and ill people can eat.]

Procession through the streets of Cairo on the 1st day of Ramadan, c. 1870

Fasting, or Sawm, is one of the Five Pillars of Islam. The others are Faith (Iman), Prayer (Salah), Charity (Zakah), and Pilgrimage (Hajj).

The fasting refers not only to food, but to the abstinence of earthly desires. The Fast is is a way to show faith and devotion to God; yet it is much more than that. Muslims use this time to seek spiritual guidance and to atonefor sins and past mistakes. According to www.30-days.net:

Fasting helps one to experience how a hungry person feels and what it is like to have an empty stomach. It teaches one to share the sufferings of the less fortunate. Muslims believe that fasting leads one to appreciate the bounties of Allah, which are usually taken for granted – until they are missed!

Ten or fifteen years ago, when Ramadan fell in the middle of winter, it was easier to fast, since the days were shorter. As we move into the summer months the fasting hours grow longer and longer.

But as Shahed Amanullah points out:

There is, however, a bright side to this holiday mobility. As Ramadan moves slowly through the calendar year, we have multiple opportunities to share Ramadan with other faith traditions and holidays as their paths cross in time. And each time this happens, there is a bit of cross-pollination that goes on that I believe enriches both traditions.

The word ‘Ramadan’ comes from an Arabic ramida, meaning “scorching heat”. It refers to the purging of sin from the soul. 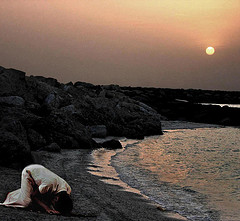 Watch for the Sunset (©Aphrodite)

You Know It’s Ramadan When…

“August 23 will be the first day of the Holy Month Ramadan as the moon was not sighted on Friday, according to the Central Ruet-i-Hilal Committee.”

Hilal has been sighted over many places (Florida, Texas etc) in the USA after the sunset on Friday 21st August 2009. The astronomical data also strongly predicted the possibility of naked-eye sighting in most of North America. Therefore we announce that Saturday, 22nd August 2009 is the first date of Ramadhan 1430.

This month marks a rare occurrence in the Islamic and Gregorian calendars. The ninth months of both calendars (Ramadan and September, respectively) begin and end on just about the same days. The Gregorian date of Ramadan will vary depending on where in the world you are and on the night sky. But essentially, Ramadan 1429 will begin September 1 and end on September 29th or 30th.

This just in! Ramadan Announced