In the grand saga of the Russian Empire, Russia Day is a relatively new holiday, eagerly burrowing into the Russian consciousness to create roots and establish traditions.

In the early 1990’s it was known as “Russian Independence Day”. June 12th marks the day in 1990 that the Congress of People’s Deputies of the Soviet Russian Republic declared independence from the Soviet Union.

The irony that Russia declared independence from an entity to which it was virtually synonymous in the eyes of the world was not lost on the Russians. So in 1994, the holiday name was changed to “Day of the Declaration of the Sovereignty of the Russian Federation” for clarification, which was ultimately more confusing than the first name.

Finally, in an uncharacteristic Russian push for brevity, Vladimir Putin shortened it to Russia Day in 2002, and the name has stuck.

One Russia Day tradition is the handing out of the “Russia Medals” for achievements in science and culture. But the rituals that seem to have made the biggest headway are sports and racing.

Marathons, drag races and motorcycle stunt competitions will bring Moscow traffic to a stop today. Several running and motoring races take place today, including the final leg of the 1,151 kilometer “Golden Ring” race which finishes up just outside the Kremlin, and the “drifting” contests where drivers basically treat their cars like big roller skates. The weekend also hosts the “Call of Russia” Tournament, the Independence Cup, and the Moscow Sailing Cup.

In general though, the populace has yet to rally around June 12th as a symbol of what it means to be Russian.

“…for some people, June 12 signifies a tragedy because it marks the end of a glorious Soviet era. And for others, the date means nothing at all. What a fitting date for a state holiday!” — Boris Kagarlitsk, Moscow Times

But I love Russia Day if, for nothing else, it gives me an excuse to post one of my favorite pictures. 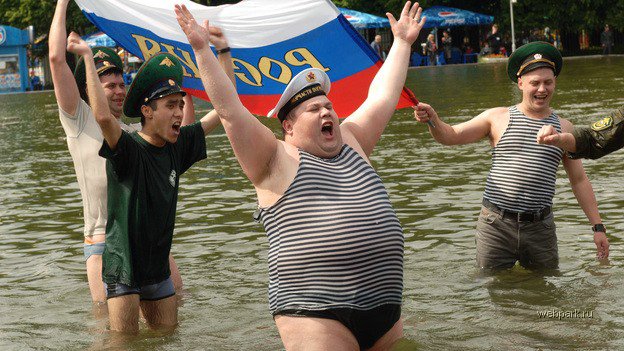