Like a family of members forced to live under one roof through most of the 20th century, the states that made up Yugoslavia had little in common but rivalries. Forged in the wake of World War I, the country was initially known as the Kingdom of Serbs, Croats, and Slovenes. The Kingdom of Yugoslavia, as it was later called, was dismantled after the Nazi invasion of 1941.

The country rose from the ashes of World War II as Democratic Federal Yugoslavia. Then as Socialist Federal Republic of Yugoslavia. (The Democratic thing didn’t work out too well.) Yugoslavia—the union of Serbia, Croatia, Slovenia, Macedonia, Montenegro, and Bosnia & Herzegovina—held together during the post-War period largely due to the iron will of one man, Josep Tito, the country’s president from 1953 to 1980.

Tito didn’t get along with Stalin. Because Yugoslavia’s Socialist revolution wasn’t thrust upon it by the Soviet Union, but was home-grown, Yugoslavia’s Communist Party wasn’t dependent upon the Soviets. They didn’t look at Stalin as a national hero. Relations with the Soviets soured after Yugoslavia refused to compromise its independence and merge with Bulgaria, as the Soviet Union requested. And throughout the Cold War, Yugoslavia remained neutral.

In 1980 President Tito’s death left a power vacuum that would never be filled. In the late 80’s, ethnic tensions broke out in Kosovo and across the separate states.

Tensions came to a head in June 1991 when, following a Croatian referendum, Croatia and Slovenia announced their intentions to break away from the union. Both states declared their independence on June 25th of that year. Though Slovenia’s declaration met with some violence, Croatia’s erupted into a full scale war. The former Yugoslavia became the site of one of the bloodiest European conflicts since the end of the World War II. 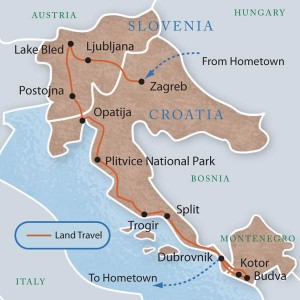