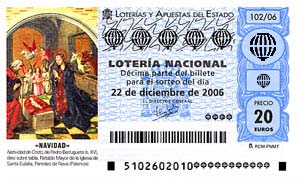 The Spanish Christmas Lottery isn’t officially a holiday, but it’s an inseparable part of the holiday season in Spain, dating back to 1812. Each December 22, the entire nation waits on the edge of their seats for the winning numbers to be announced on TV, in a program that takes several hours. It’s estimated that 98% of Spanish residents take part in this lottery. It’s the largest lottery in the world in terms of payout.

“Spain spends more per head on gambling than anywhere else in the world…not because they are habitual gamblers but simply that the christmas lottery is a tradition in which the whole nation partakes!”

The first prize, aka El Gordo (“the fat one”), is 3 million Euros. May not sound like much, but the 3 million isn’t split up. Rather, there are close to 200 winning tickets, and each winner gets 3 million Euros! When you take into account that’s just one of the 1770+ prizes, the pot is well over 2 billion Euros.

The lottery tickets are more like raffle tickets on which the numbers are already printed—ie., you don’t choose your own. This enables the government to control the maximum number of winning tickets: 195. There are 195 “series” of tickets, each containing tickets with numbers ranging from 00001 to 85000. So if the winning El Gordo number is 78,294—as it was in 2009—there are a maximum of 195 winning tickets. [OK, apparently it’s more complicated than that, as participants can choose to purchase “one-tenth” of a ticket for one-tenth the price, in which case they could claim only one-tenth of the prize should they win.]

The big winner in the Christmas lottery is the same each year: the Spanish government pockets 30% of the gross, not to mention any unclaimed prizes. Close to a billion Euros!

Anyway, the point is, Christmas is a special time. A time of giving and of gambling.

But if you get an email informing you you’ve won the Spanish Lottery, as many people do, there’s a 100% chance it’s a scam. According to the U.S. State Department:

“To enter and win “El Gordo,” you must be a resident of Spain and purchase your ticket within the country. Keep in mind YOU CANNOT WIN IF YOU DID NOT BUY A TICKET! … It is against U.S. federal law to play a foreign lottery through the mail or over the phone.”

And if you did happen to win the Spanish Christmas Lottery this year, don’t forget “Every Day’s a Holiday” on your Christmas list!