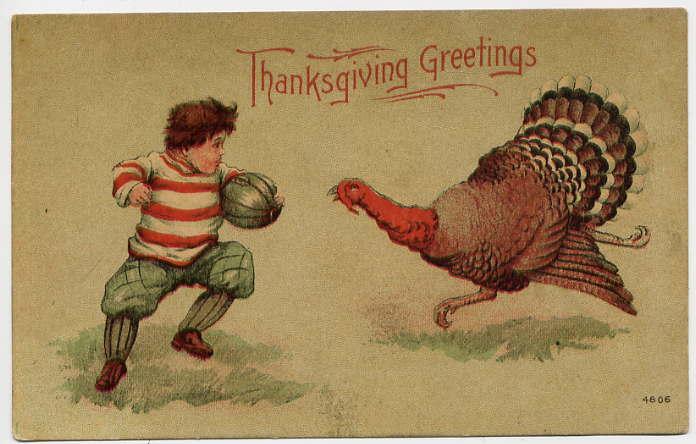 Today Americans join with friends and family to declare thanks for the past year’s blessings.

Though scholars argue over the first true Thanksgiving in North America, popular tradition attributes the holiday to the three-day feast of the Plymouth Rock Pilgrims and the Wampanoag Indians who showed them the ropes in 1621.

The celebrants feasted on deer and corn as well as turkey, and did so in early Autumn rather than in November. The Pilgrims had chosen to migrate to New England during the height (or depth) of the Little Ice Age, meaning Massachusetts was even colder in November than it is now. (Yes, hard to imagine.)

And the Pilgrims didn’t consider it a “Day of Thanksgiving” either.

To the Pilgrims, “Days of Thanksgiving” were solemn occasions of prayer, not feasts, during which labor and recreation were both discouraged. The Pilgrims’ first official Thanksgiving was a day of prayer in July 1623, after a drought. In the 19th century the memory of this event merged in the public eye with the autumn 1621 feast, perhaps given a boost by the rediscovery of the Plymouth Governor William Bradford’s journal by an English bishop in the 1850’s.

Though the British don’t celebrate Thanksgiving, the American tradition hails from England. Queen Elizabeth I had proclaimed a Day of Thanksgiving in 1588 after the destruction of the Spanish Armada. The first annual Day of Thanksgiving in Britain was declared in November 1605 after London authorities thwarted a terrorist plot to blow up Parliament, an event celebrated today as Guy Fawkes Day.

Autumnal harvest festivals were nothing new, but Days of Thanksgiving were also proclaimed after victories in times of war. In 1676, for example, descendants of the Pilgrims declared a Day of Thanksgiving for their victory over their former friends, the Wampanoag.

101 years later in the midst of the Revolutionary War, the Continental Congress declared December 18, 1777 a day of “solemn thanksgiving and praise,” and a day to support the troops through prayer.

George Washington declared Thursday, November 26, 1789 a day of Thanksgiving during his first year as President, a tradition continued by John Adams. But a national Thanksgiving fell by the wayside until Congress and President Madison declared a Thanksgiving Day in 1814, following the end of the War of 1812.

The biggest Thanksgiving bump occurred in 1863, when the nation was at war with its most formidable enemy: itself. Three months after the Battle of Gettysburg, President Lincoln sought to unify the country through prayer, by asking all Americans to “set apart and observe the last Thursday of November next, as a day of Thanksgiving and Praise to our beneficent Father who dwelleth in the Heavens.”

It was the first Thanksgiving following the enactment of the Emancipation Proclamation.

Thanksgiving’s association with the first Pilgrims solidified throughout the 19th century as the reunified country sought to fortify its own unique national traditions.

That year, Franklin D. Roosevelt’s first year in office, November had five Thursdays, and Thanksgiving was to fall on the last day of the month. As one merchant organization wrote:

FDR moved Thanksgiving to the 4th Thursday in November, and did so again in 1939, despite letters of protest from calendar makers who had printed their calendars, universities that had planned their football season and vacations, traditionalists who believed that centuries-old holidays shouldn’t revolve around department stores, and one tongue-in-cheek West Virginian who wrote:

“I see by the paper this morning where you want to change Thanksgiving Day to November 23 of which I heartily approve. Thanks.

Now, there are some things that I would like done and would appreciate your approval:

1. Have Sunday changed to Wednesday;

2. Have Monday’s to be Christmas;

3. Have it strictly against the Will of God to work on Tuesday;

4. Have Thursday to be Pay Day with time and one-half for overtime;

5. Require everyone to take Friday and Saturday off for a fishing trip down the Potomac.”

Americans are a grateful people, ever mindful of the many ways we have been blessed. On Thanksgiving Day, we lift our hearts in gratitude for the freedoms we enjoy, the people we love, and the gifts of our prosperous land…

Since the first National Day of Thanksgiving was proclaimed by President George Washington, Americans have come together to offer thanks for our many blessings. We recall the great privilege it is to live in a land where freedom is the right of every person and where all can pursue their dreams.