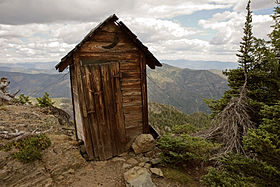 Unfortunately you are not.

Poor sanitation kills more people each year than AIDS, but you won’t see any celebrities sporting brown ribbons at this year’s Oscars, and discussions of toilets still emit a response from educated adults akin to the uncomfortable, strained snickering of 7th graders during a sex ed lesson.

“As we passed along the reeking banks of the sewer, the sun shone upon a narrow slip of the water…more like watery mud than muddy water…we saw drains and sewers emptying their filthy contents into it…we heard bucket after bucket of filth splash into it; and the limbs of the vagrant boys bathing in it…we saw a little child…lower a tin can with a rope to fill a large bucket that stood beside her…As the little thing dangled her tin cup as gently as possible into the stream, a bucket of night-soil was poured down from the next gallery.”

India? Bangladesh? Nope, the above description is from the London Morning Chronicle, circa 1849, during a devastating cholera epidemic that few understood. Today we know about the importance of separating feces from drinking water. Yet toilets are not considered a top priority for many inhabitants of developing countries, even for those residents who chat on their new cell phones in public, but do their business in the stream. And even in countries like the U.S. it was only recently that public outcry over restaurant sanitation led to that industry’s standardized ratings system. 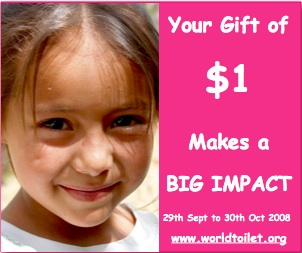 World Toilet Day was created by the World Toilet Organization not only to spread awareness of sanitation issues, but to lend ‘speakability’ to one of the most important and overlooked inventions of the past 200 years.

“A lot of people asked why we use the word ‘toilet‘,” says Naureen Nayyar, a representative of the WTO…

“It’s because…if we tell people we want to change the role and the way people view toilets we can’t go about it in a bashful manner. Every change that’s come about in society…has come from making people uncomfortable at first.”

The World Toilet Organization has taken on the extremely uphill battle of making the toilet ‘sexy’ and hence desirable to residents of countries seeking to emulate Western lifestyles. While cell phones are the rage, you won’t find toilets of the rich and famous on film or TV. In fact, the ubiquitous porcelain bowl didn’t make its big screen debut until the 1960 Alfred Hitchcock thriller Psycho.

With the trendiness of the green movement and environmentalism, sanitation has finally come to the forefront of world attention, but for some reason the concept of the toilet has remained behind (no pun intended).

On the World Toilet Organization’s website, you can sponsor a household toilet for $140. I asked Nayyar why on earth toilets are so expensive in the 3rd World. She explained that part of the money goes toward education, teaching the public about the importance of a safe, separate place for defecation.

“Toilets are not a great topic, they are not loved, they are not appreciated, but they are a huge necessity that could help reduce the increase of diseases as populations grow, and the sanitation business is a vital part of keeping our waters and world clean.”

The river runs stinking, and all its brink
Is a fringe of every detectable stink:
Bone-boilers and gas-workers and gut-makers there
Are poisoning earth and polluting air.
But touch them who dares; prevent them who can;
What is the Health to the Wealth of man?

The Ghost Map – Steven Johnson – The Story of London’s Most Terrifying Epidemic and How It Changed Science, Cities, and the Modern World

Ode to the Commode – LA Times