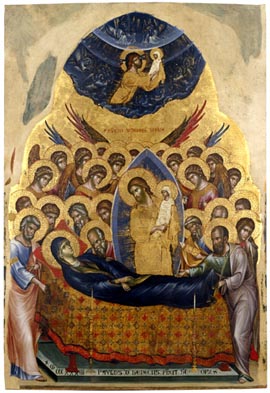 Celebrated on August 15, the Assumption refers to the death of Mary, the mother of Jesus, and her entry into heaven. But ‘Assumption’ might also refer to what we base our knowledge of the event on, which is–well, nothing.

That’s right, there’s actually no mention of Mary’s Assumption in any of the Gospels. But that’s hardly surprising. In the centuries after Jesus’ death, the sites of his last years in Jerusalem were purged of any reference to the religion that he preached, as the city was completely rebuilt by Emperor Hadrian in homage to pagan gods.

“After the building of the Church of the Holy Sepulchre in 336, the sacred sites began to be restored and the memories of the life of Our Lord began to be celebrated by the people of Jerusalem,” writes Father Clifford Stevens.

One such site was the “Place of Dormition”, said to be the place where Mary “fell asleep” for the last time. The locals celebrated not the Assumption, but the “Memory of Mary”

For a time, the “Memory of Mary” was marked only in Palestine, but then it was extended by the emperor to all the churches of the East. In the seventh century, it began to be celebrated in Rome under the title of the “Falling Asleep” (“Dormitio”) of the Mother of God. Soon the name was changed to the “Assumption of Mary,” since there was more to the feast than her dying. It also proclaimed that she had been taken up, body and soul, into heaven.

According to tradition, Mary was taken up to heaven body and soul, rather than her soul alone–placing her in a select group of people, including the prophets Enoch and Elijah. By the 13th century the story of the Assumption was accepted as fact my much of Christendom. But the Assumption wasn’t deemed official church dogma until Pope Pius XII proclaimed it so in 1950.