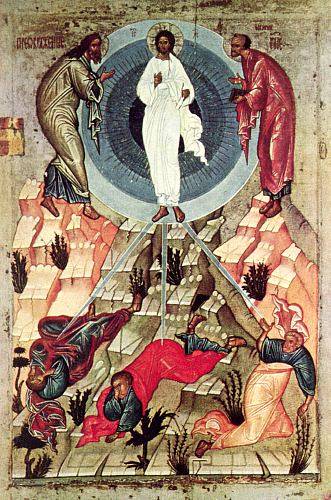 transfiguration:
a: a change in form or appearance; metamorphosis
b: an exalting, glorifying, or spiritual change

The transfiguration, celebrated by the Roman Catholic Church each year on August 6, refers to what is perhaps history’s greatest Kodak moment: Jesus talking with the prophets Moses and Elijah (Elias) on the peak of Mount Tabor in 27AD.

Only the Apostles Peter, John and James witnessed the event, and unfortunately none of them posted pics it to their myspace account. (If you have a photograph of the Transfiguration, please email it to us!) Nor do we have any record of what was discussed, for the disciples were too distant to hear the conversation, and Jesus forbade them from even mentioned the event until after the Son of Man had risen.

What we do know comes from nearly identical versions in the Gospels of Matthew, Mark and Luke.

Jesus led the three Apostles to the mountaintop where “His face shone like the sun and his clothes became as white as the light,” says Mark.

“Just then there appeared before them Moses and Elijah, talking with Jesus,” continues Matthew.

Peter offered to set up three shelters, one for each prophet, but as he spoke a cloud enveloped them. “A voice came from the cloud, saying, ‘This is my Son, whom I have chosen; listen to him,” concludes Luke. When the Disciples looked again, the two prophets had disappeared.

In Jesus’ time, Moses was seen as having delivered the Law from God to the people and codifying it during their 40 year trek across the desert. In fact, after Genesis and half of Exodus, that’s what most of the first five books of the Bible are: lengthy lists and descriptions of the laws that governed ancient Hebrew society, from the now obscure laws concerning the treatment of slaves, the ritual sacrifice of goats, and proper stoning technique, to principles still considered the basis of Western law, such as “Thou shall not kill.”

Elijah meanwhile, may have represented the Prophets. Elijah is a prophet in the Jewish, Christian and Muslim faiths (“Ilyas” in Islam), but occupies very little space in any of those religions’ spiritual texts. One of his claims to fame was that he was said to have never died. Instead he was taken up to heaven in a chariot of fire. It was believed his future appearance on Earth would be an imminent predictor of the coming of the Messiah. In the New Testament, folks take St. John the Baptist for Elijah.

For all its celebration among the churches themselves, the event receives very little attention from the general Christian public. And these days a child is less likely to learn about transfiguration from Matthew, Luke, or Mark than from Harry:

“Transfiguration is some of the most complex and dangerous magic you will learn at Hogwarts. Anyone messing around in my class will leave and not come back.”

[2008: This year the Transfiguration falls only a few days away from Islam’s Al-Miraj, the Ascension of the Prophet. During what is often called the “Night Journey,” Muhammad travels first to Jerusalem in a single night, then up to the heavens where he meets the prophets of Islam’s past, including Jesus, Moses, and Abraham. Like the Transfiguration in Christianity, Islamic religious leaders debate whether Al-Miraj is an actual event or symbolic allegory. And like Jesus, Muhammad is transformed prior to the encounter, not by light but by the Qur’an’s most famous open-heart surgery.]

7 Replies to “Transfiguration of Jesus”