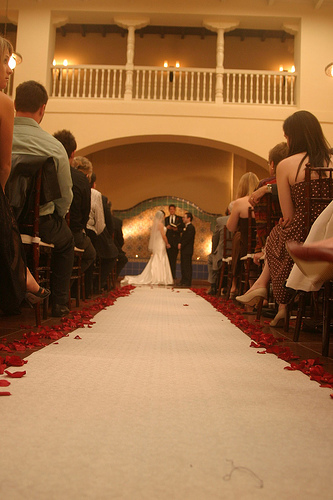 Between Lincoln’s and Washington’s Birthdays in February comes another birthday, one that has been celebrated far longer than either President, but for a man whose life is all but unknown.

The awakening of spring has always been associated with the blossoming of love. In the Roman calendar February was the last month of the year, a time of purification before the new agrarian planting season.

Lupercalia commemorated the She-wolf that suckled the babies Romulus (founder of Rome) and his brother Remus in a cave on the site of the future capital. On February 15 each year a group of priests known as the Brotherhood of the Wolf, or Luperci, would strip to their birthday suits and sacrifice a dog and goat at the cave. Then they’d put on loincloths of the goat’s skin and go about the streets of Rome smacking women on their backsides with an animal skin lash, known as a februa (from the Latin februare, meaning “to purify”) in a ritual intended to promote fertility and ease the pangs of childbirth.

The Romans celebrated another festival in mid-February: Juno Februata. On the 14th of February eligible young men and women would participate in Roman Spin-the-Bottle. Boys would draw the names of eligible girls and ‘couple up’ during the festivities, sometimes for the entire year.

Around 496 AD Pope Gelasius banned the old pagan rituals and introduced the Festival of the Purification of the Virgin on February 14, which was later moved to February 2. The Church tried to replace to earlier rituals by having boys and girls draw the names of a saint and emulate the life of that saint. For whatever reason, that zany tradition never caught on with the same vigor as the Roman one.

Some scholars say that St. Valentine’s Day was a minor feast with no connection to romance or couples up until the 14th century. It was then that writers such as Chaucer and his contemporaries began referring to it as the day that birds chose their mates.

Chaucer wrote “The Parliament of Fowls”—referring to birds, not the English governing body—in tribute to Richard II’s engagement to Anne of Bohemia in 1381.

”[it] was on seynt Volantynys day
When euery byrd comyth there to chese his make.”
(It was sent on Saint Valentine’s Day,
When every bird comes there to choose his mate…)

It was a common writing device for poets to link certain events with the saint whose feast was observed that day. However the Valentine Chaucer referred to was the one whose feast was celebrated on May 3, for May 3 was the date of the King’s engagement. Chaucer describes conditions common to late Spring. (Chaucer and the Cult of Saint Valentine.)

The marriage of the royal 16 year-olds Anne and Richard was one based in love rather than politics. It ended with Anne’s death from plague 12 years later. Richard was never the same after her death, and was deposed and killed in 1400…on February 14.

Nearly a dozen ‘Valentines’ were canonized in the first centuries of the Christian Church, and to this day no one really knows which one we celebrate on February 14. (Would the Real Saint Valentine Please Stand Up)

[Others say Valentine’s origin is a case of semantics. That Valentine comes from the Norman-French term galantin, meaning something like “woman-lover” in a chivalrous sense. It’s where we get the words “gallant” and “gallantry”.]

One Reply to “Love in the Time of V.D. (Valentine’s Day)”