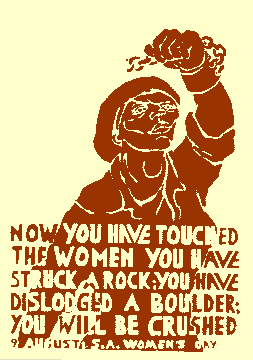 South Africa’s Women’s Day recalls the 20,000 woman-strong march in Pretoria on this day in 1956.

The marchers protested amendments to the Urban Areas Act, which, among other things, reserved urban living spaces for white South Africans, and required black men in cities and towns to carry special passes with them at all times or be subject to arrest. Originally enacted in 1923, the Pass Laws were expanded in the 1950s to require all black South Africans over 16 to carry the pass. Bearers had to have their passes approved each month by their employer–employers who, by South African law, could only be white.

As a gesture of unity against apartheid, tens of thousands of black South African women converged on the Union Buildings in Pretoria, the seat of the South African government, and delivered a petition with 100,000 signatures to the Prime Minister’s door.

The Pass Laws were not repealed until 30 more years of struggle, protest, and bloodshed.

Years later, the song chanted by the women that day, Wathint’ abafazi, wathint imbokodo” (“When you touch a woman, you strike a rock”), has become the motto of the women’s movement in South Africa and continues to be a symbol of women’s strength against racism and sexism.