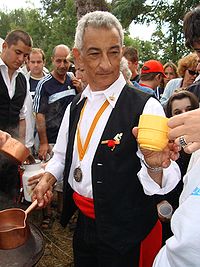 Today (August 16) the town of Palau de Cedagne in Southwestern France celebrates Xicolatada. At 11 am on this date, residents indulge in a delicious cup of piping hot chocolate.

This 300+ year-old tradition grew out of another festival. According to legend (i.e., Wikipedia):

15 August was once a festival day, and the locals would drink quite a bit, to the point that they felt a bit ill the following morning. To feel better, the village chocolatier would offer them a hot chocolate, which he claimed was an excellent remedy. Over the years, this habit grew into a custom, and eventually a municipal association was formed to remember the tradition and to organise the distribution of hot chocolate every year on 16 August, at precisely 11 in the morning.

At the time, chocolate was imported through Spain from the Latin American colonies. Located on the border of Spain and France in the Pyrenees, Palau de Cedagne was perfectly situated along popular trade routes.

Today the hot chocolate brewing follows an age-old secret recipe, cooked up in cauldrons, by a brotherhood of well-trained “Mestres xicolaters” (maîtres chocolatiers).