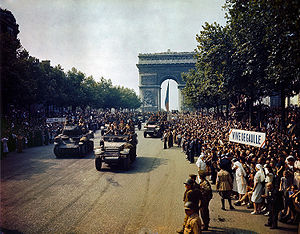 The above line was supposedly uttered by Adolf Hitler to his chief of staff Alfred Jodl, referring to his order to General Dietrich von Choltitz, military governor of Paris during the German occupation, not to let majestic city of Paris fall back into Allied hands, except as complete rubble.

In August 1944, General Eisenhower originally refused to divert troops to help the liberate Paris on the Allies’ way to Berlin; however, Charles de Gaulle threatened to take his own Free French forces anyway, alone if need be.

Choltitz is one of the most controversial figures of the Vichy France. He is seen as a hero to some for refusing to obey HItler’s orders to destroy one of the greatest cities in the world. However, in addition to having served Hitler and the Nazis faithfully during the war, he ordered the executions of numerous French Resistance fighters and destroyed Paris’s Grand Palais in the final days before the Liberation. His motivations may never be fully known, but fortunately for us, centuries-old Parisian landmarks survived the war and the battle for liberation with minimal physical damage.

On this day in 1944, Charles de Gaulle, leader of the Free French, addressed his newly liberated countrymen from the Hotel de Ville:

We, who have lived the greatest hours of our History, we have nothing else to wish than to show ourselves, up to the end, worthy of France.

Liberation Day is not a national holiday in France. Rather, the French celebrate Victory Day 1945 on May 8, the anniversary of the official end of hostilities in Europe the day after the surrender of German forces in Rheims, France.

One Reply to “Liberation of Paris”