“Susan B. Anthony is not on trial; the United States is on trial.”

Women’s Equality Day celebrates the anniversary of the passage of the 19th Amendment on August 26, 1920. The amendment gave American women the long-fought-for right to vote. One of the most vocal and influential activists for women’s suffrage was Susan B. Anthony. In fact, in Massachusetts it’s Susan B. Anthony Day today, in honor of the famed activist, human rights defender, and convicted felon.

That’s right. Susan B. Anthony was arrested on November 18, 1872 for voting in the November 5 presidential election, “without having a lawful right to vote and in violation of section 19 of an act of Congress.”

In order to prevent damage to her reputation, Commissioner Storrs sent word to Anthony, requesting that she come down to his office. Anthony responded saying she “had no social acquaintance with him and didn’t wish to call on him.” The Commissioner was forced to send a deputy marshal to Anthony’s residence in Rochester, New York. She later recalled:

“He sat down. He said it was pleasant weather. He hemmed and hawed and finally said Mr. Storrs wanted to see me… ‘what for?’ I asked. ‘To arrest you.’ said he. ‘Is that the way you arrest men?’ ‘No.’ Then I demanded that I should be arrested properly.”

Anthony refused to pay bail. The case made national headlines, and letters flooded in. To her dismay, Anthony’s lawyer did pay her bail without her knowledge, explaining “I could not see a lady I respected put in jail.” (This however, later ruined her chance of bringing the case to the Supreme Court.)

Anthony’s lawyer argued—as Anthony had done herself outside of court—that the wording of the 14th Amendment gave all citizens of the United States the right to vote. After a lengthy trial, covered daily in the national press, and at which Anthony herself was not allowed to testify, the judge announced: “The Fourteenth Amendment gives no right to a woman to vote, and the voting by Miss Anthony was in violation of the law…Upon this evidence I supposed there is no question for the jury and the jury should be directed to find a verdict of guilty.”

The judge pronounced her guilty without ever calling on the jury to deliberate.

Before sentencing, the judge asked Anthony: “Has the prisoner anything to say why sentence shall not be pronounced?”

Not one to make waves, Anthony told the judge:

“Yes, your honor, I have many things to say; for in your ordered verdict of guilty, you have trampled under foot every vital principle of our government…May it please the Court to remember that since the day of my arrest last November, this is the first time that either myself or any person of my disfranchised class has been allowed a word of defense before judge or jury…All of my prosecutors, from the eighth ward corner grocery politician who entered the complaint, to the United States Marshal, Commissioner, District Attorney, District Judge, your honor on the bench, not one is my peer, but each and all are my political sovereigns; and had your honor submitted my case to the jury, as was clearly your duty, even then I should have had just cause of protest, for not one of those men was peer; but, native or foreign born, white or black, rich or poor, educated or ignorant, awake or asleep, sober or drunk, each and every man of them was my political superior; hence in no sense, my peer.”

Anthony continued for some time, ignoring the judge’s orders for silence. Finally the judge ordered Anthony to pay $100 and the costs of prosecution. Anthony simply said:

May it please your honor, I shall never pay a dollar of your unjust penalty. All the stock in trade I possess is a $10,000 debt, incurred by publishing my paper–The Revolution–four years ago, the sole object of which was to educate all women to do precisely as I have done, rebel against your manmade, unjust, unconstitutional forms of law, that tax, fine, imprison and hang women, while they deny them the right of representation in the government…And I shall earnestly and persistently continue to urge all women to the practical recognition of the old revolutionary maxim, that ‘Resistance to tyranny is obedience to God.’

She never paid the fine.

Oh, and in case you were wondering, she voted Republican. 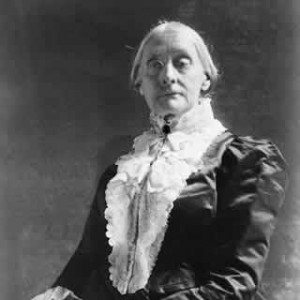