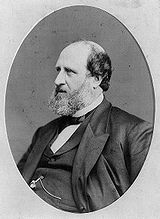 Tweed is so awesome,
Woolen clothing from Scotland
That’s fashionable.

Today we sing the virtues of that most durable fabric, tweed.

Tweed Day remembers the corrupt politician who held New York City in the palm of his hand in the mid-1800s.

William Magear Tweed was “Boss” Tweed of Tammany Hall, the Democratic political machine that essentially ran New York. Tweed was born on this day (April 3) in 1823. The son of a Scottish-American chair-maker on the Lower East Side, he began his political career by organizing volunteer fire departments. He and Tammany Hall earned the support of New York’s working-class Irish immigrants, granting citizenship to potential constituents at the rate of 2,000 voters a day. (It Happened on Washington Square, Emily Kies Folpe)

He was elected to the U.S. House of Representatives at the tender age of 29, to the New York State Senate in 1867, and in 1868 was made “grand sachem” (Big Poobah) of Tammany Hall.

It’s estimated that Tweed stole—I mean “misappropriated” between $40 and$200 million dollars from the public during his tenure, which back in the 1860s was considered a lot of money. (We’re talking 1860’s dollars here, so billions by today’s standards.)

Boss Tweed’s downfall is often attributed to the satirical political cartoons of Thomas Nast in Harper’s Weekly starting in 1868. Legend has it, Tweed said of the cartoons, “Stop them damn pictures. I don’t care what the papers write about me. My constituents can’t read. But, damn it, they can see the pictures.”

But in truth Tweed was still at the height of his power in late 1870 when an investigation by “six businessmen with unimpeachable reputations” found that Tweed’s books had been “faithfully kept” and could find no wrong-doing. Tweed was expected to run for and win the New York U.S. Senate seat in 1872.

Tweed’s real downfall wasn’t the papers. It was a holiday: the Glorious Twelfth. No, not Grouse-hunting day, the other Glorious Twelfth. July 12th is a Northern Irish Protestant holiday celebrating King William of Orange’s victory over the largely Irish Catholic forces of King James II at the Battle of the Boyne in 1690.

In July 1871, Irish Protestants in New York City (the Loyal Order of Orange) sought permission to throw an Orange Parade.

“Irish Catholic organizations protested that the parade would be an insult to their community and pointed to the Orangemen’s behavior the previous July 12, when they had marched up Eighth Avenue…”

The marchers the previous year had the ingenious idea of hurling epithets at Irish workers who were laying pipe along the streets they passed, and sang such rousing hits as “Croppies, Lie Down.” Eight people were killed in the violence that ensued.

Tweed nixed the 1871 parade, and the Protestants, fearing that Irish Catholics had taken over their city, laid into Tweed. Public tide rapidly turned against him until Tweed and the Governor were forced to reverse the decision and allowed the parade to take place.

In the infamous “Orange Riots of July 12th” that started as a parade, between thirty and sixty people were killed, including two police officers. Over a hundred citizens were wounded, and twenty policemen.

After the riot, both sides were fed up with the Boss. And someone upset at Tweed for the whole parade debacle supplied the Times with the incriminating evidence they needed to convict him in the court of public approval.

“On July 22, ten days after the Boyne Day battle, the Times began publishing solid evidence of Ring rascality, turned over to the paper by an aggrieved insider. Day after Day, publisher George Jones reproduced whole pages from the cooked account books of James Watson, who until his recent death in a sleighing accident up in Harlem Lane had been the Ring’s trusted bookkeeper.” (Gotham)

The investigation revealed a plague of graft and corruption unprecedented in American politics.

In one example, New York City paid more for a single courthouse under Tweed than Secretary of State Seward had just paid for the territory of Alaska.

In fact the courthouse cost twice as much as Alaska, and four times as much as Britain’s Houses of Parliament. [Now that’s fiscal stimulus!]

The rest of the Tweed timeline goes like this:

Moral of the story: You can lie, cheat, and steal, but don’t mess with people’s parades. Or their holidays.

I’ve no idea who started this holiday, or why we remember a corrupt politician. The earliest references I’ve found are only a few decades old, in Chase’s Calendar of Events. But for the record, everydaysaholiday.org neither condones nor condemns this holiday, and we wholly support the right of the God-loving people of this land to celebrate the durable Scottish fabric we call Tweed.

“If everyone wears a tweed cap on April 3rd, after having endured the proper amount of ridicule from co-workers, you can all meet up in State House Square and re-enact the big dance scene from Newsies in celebration of Tweed.”

One Reply to “Tweed Day”